It all started with a Spark. A spark of an idea to build a special kind of gathering place.

It started almost a century ago, when Russian logger Ivan Sesow built the Wonder View Log Pavilion as a roadside dancehall. With its infamous “sin cabins” and bootleg liquor, the 1924 roadhouse earned a rowdy reputation. In 1938, the Parrish and deSchweinitz families acquired the property, dubbing it Johnny Seesaw’s as a nod to its founder and developing it as one of the area’s first ski lodges. Countless patrons, parties, fireside chats and wild nights later, the inn still celebrates all things Vermont in the same convivial spirit.

1761
Originally called Brumley, the town is chartered by the Royal Governor of New Hampshire Benning Wentworth.

1804
The town is renamed "Peru" after the gold-rich South American country. The first sawmill is built in the area. Logging becomes the dominant industry for more than a century.

1805
Benjamin Barnard Jr. buys the land where Seesaw's stands today for $400, building a small log house and a barn that reportedly becam a tavern. 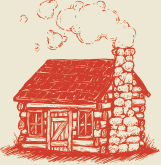 1924
After passing through a series of hands, the land is sold to Russian immigrant Ivan Sesow and his wife Vinnie. They built the Wonder View Log Pavilion, a roadside dancehall.

1931
As the Great Depression deepens, Sesow and his wife take out multiple loans to keep the Wonder View afloat. Contrary to local legend, Sesow doesn't lose the property in a poker game, but defaults on a loan.

1932
The federal government establishes the Green Mountain National Forest, laying the groundwork for the local ski industry to thrive.

1938
At the encouragement of his mother, avid skier Lew deSchweinitz along with his broher-in-law Bill Parrish buy the neglected property and turns it into a ski lodge. They open on December 26th and are fully booked within days. 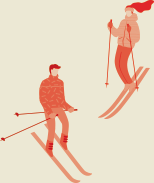 1942
The Parrishes establish the High Mountain Farm on the inn property, enabling Johnny Seesaw's to stay open and attract tourists to the areas on lean times.

1974
The deSchweinitzes retire from the business, while the Parrishes help transition the property to its new owners who fail to attract new guests, and the operation struggles.

1980
Gary Okun and his wife Nancy buy the property and become great stewards of Seesaw's in the modern era, operating seven days per week, always bustling with locals and out-of-towners.

2015
Ryan and Kim Prins see an opportunity to reimagine Seesaw's and embark, with partners, on a three year plan to rebuild the property ensuring the Seesaw's legacy will continue for generations to come.

2018
The newly restored and thoughtfully reimagined Seesaw's Lodge and Johnny Seesaw's open their doors, welcoming back old friends and inviting new ones to celebrate all that Vermont has to offer.